A Glass At The Chateau (B&W)

First Taste Of The Harvest

In The Warmth Of The Sun 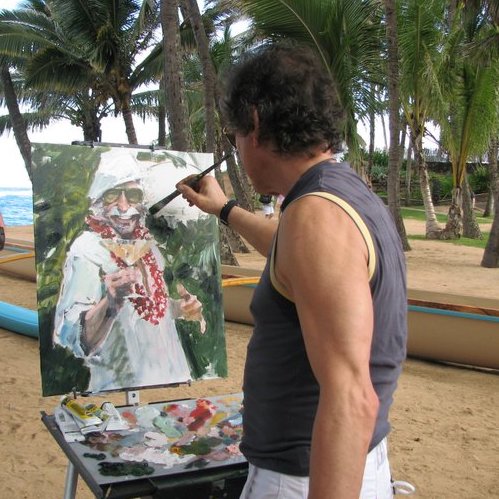 Aldo Luongo was born in Buenos Aires, Argentina, of Italian heritage. Since as far back as he can remember, Luongo had two great passions: art and soccer. Shortly after his graduation from the Academy of Fine Arts in Buenos Aires, Aldo Luongo came to the U.S. to play professional soccer for the New York Generals. After his athletic career was cut short due to an injury, he arrived in New York City with a dream to pursue his artwork full time.

In the 70’s, Aldo Luongo had his first major success with multiple reproductions of his black & white drawings. Not only were these prints released to great critical acclaim, they were a huge commercial success as well (hundreds of thousands of pieces sold within several years). Aldo had put himself on the map as a major international artist.

Aldo Luongo has continued his reign at the top of the contemporary art world for almost four decades – a distinction that puts him in a class of his own. Mr. Luongo has received numerous awards and honors, including being named a 3-time official Olympic Artist (Summer 1988, Summer 1996, and Winter 2002); an official World Cup Artist (1998); an official U.S. Women’s World Cup Artist (1999); and the 1999 Sports Artist of the Year (U.S. Sports Museum). Aldo Luongo also has twice been chosen to paint eggs for the White House Easter Egg Hunt which now reside in the Smithsonian Institute.

From his acrylics to his fine art prints, all of Aldo Luongo’s pieces embody the same sense of fluidity and intensity, the result of a true artist engaged in the passionate process of creation. His bold, impressionistic style has often been referred to as “Romance on Canvas”.  Central to all of Aldo Luongo's paintings is the balance between memory and hope, sorrow and humor, freedom and control. These dynamics are clearly apparent in his figurative works, especially those portraying "The Hawk", an archetypal character based on the memory of his father and the discovery of his future self. Aldo Luongo's artwork captures more than just the viewers gaze… it echoes the experiences of life lived to the fullest aka. the “Good Life.”

We are most likely to accept offers less than 10%.

You will receive an email confirmation